Luis Suarez insists his phone call gesture after scoring in Atletico Madrid’s 2-0 win against Barcelona was not aimed at Ronald Koeman.

The Uruguayan assisted Thomas Lemar’s opener at the Wanda Metropolitano before turning scorer in a similar move to inflict a first LaLiga defeat of the season on the out-of-sorts Catalan giants.

The 34-year-old refused to celebrate after netting against his former club but did appear to send a message to Koeman by forming a phone with his right hand and putting it to his ear before play restarted.

The now under-fire Dutchman told Suarez during a phone call last year following the his appointment that his time at the Camp Nou was over.

It hastened the striker’s departure to Atletico and led some to believe his actions on Saturday were directed at his former boss. But speaking after the game, Suarez said he had agreed on the gesture with his three children and was not a dig at Koeman.

‘(The celebration) was for the people who know I have the same number, so they know I’m still on my phone,’ Suarez told Movistar. ‘It was something I had agreed on with my kids. It was not for Koeman, not at all.’

In an interview with Spanish radio station Onda Cero in February, Suarez said: ‘When Barcelona told me that they did not count on me it was hard, I did not expect it. ‘They were very difficult moments because of the manner [in which it happened].

‘Koeman called me and told me that I was not in his plans. When Barcelona made it official that they did not count on me, conversations began with Atleti, with Cholo [manager Diego Simeone], with [CEO] Miguel Angel.’

But accompanying the gesture barely a couple of seconds after scoring was a Mohamed Salah-esque action of clasping his hands together in prayer with his eyes closed.

Suarez insists he had also decided before the game he would not celebrate if he netted against the club for whom he scored 198 goals and with whom he won four LaLiga titles along with a Champions League crown. 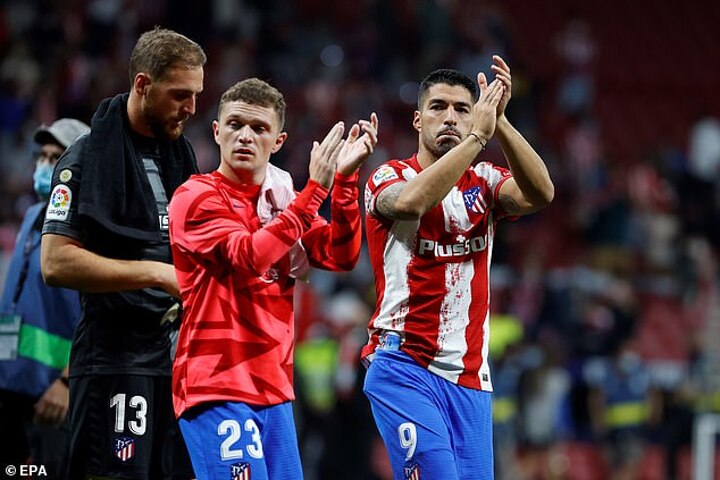 ‘I also did not celebrate fully out of respect for Barcelona. I knew if I scored I wasn’t going to celebrate,’ he added.

The result nevertheless heaps the pressure on under-fire Barcelona boss Koeman, after following up their Champions League defeat by Benfica in midweek with a league reverse in the capital.

The ex-Everton and Southampton boss was assured of his future by president Joan Laporta just hours before the defeat by Simeone’s men, and insists there is now clarity between them.

When asked about Laporta’s comment earlier in the day that the Dutch coach deserved to be given time, Koeman said: ‘We spoke last night and this morning. We have spoken about the squad and there is clarity.’

But asked if the vote of confidence could have come sooner he added: ‘Yes that could be. But I’m grateful that it’s been said. It’s never too late.’

Regarding his long-term future Koeman suggested he had urged Laporta to back him publicly.

He said: ‘I thought that it would be good to have clarity. But I know results always decide. We have to win our three home games after the international break.

‘I believe that I can improve the situation. We are missing important players. All I have been able to do is get the best of the players we have had available Barcelona have registered the first of their four new signings